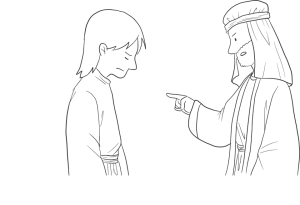 We have a whole lot of righteous people in this world today. How do I know there are a lot of them? Because they’re the first to tell you how good and upstanding they are — they don’t shy away from proclaiming themselves to be the most virtuous among us.

False piety isn’t really anything new, but it does seem to have grown exponentially over the last 30-40 years. Every day, some random religious “leader” or politician tells us how he or she is pure of heart and following the will of God and in doing so, they typically pass judgment on others — a lot go so far as to engage in blanketed condemnation of entire swaths of God’s children. I have to say, their flagrant hypocrisy would be funny, if it weren’t for the fact that their delusional words and actions actually border on the deranged.

Reading and Understanding Are Not the Same

Now these righteous, holier-than-thou pious among us, are very adept at quoting Bible passages, but almost always, its more that they’ve memorized a few that they wrongly believe bolsters their hatred and bigotry. For them, reading a passage is enough, if that Bible passage seemingly holds up their warped views. This is a classic case of reading to memorize, but never actually learning and understanding the true meaning. Thinking of this, brings us to a very good teaching from The Parables of Jesus:

“What do you think? There was a man who had two sons. He went to the first and said, ‘Son, go and work today in the vineyard.’

“‘I will not,’ he answered, but later he changed his mind and went.

Then the father went to the other son and said the same thing. He answered, ‘I will, sir,’ but he did not go.

“Which of the two did what his father wanted?”

“The first,” they answered.

Two definitions of the word pious:

The false righteous use bogus piety to convince everyone and themselves that they’re somehow super special and have an inside track as to the will of God — in their minds, they’re going to the front of the line when entering Heaven and everyone else is going on a wait list.

The parable of the Two Sons teaches us much. For one thing, it makes it abundantly clear that the “lowest” among us who listen, learn and believe, will enter Heaven before those who chose to hear, but not to learn, change and believe. So the false pious can quote all the Bible passages they want, but God knows what is in our hearts and no one…not one single person, can ever hide the truth from God. So the charlatans can boast and brag about their faith all they want, but their words and actions belie their true nature and that is one of a Wolf in Sheep’s clothing.

I love this Parable because it shows that those who truly have faith and live by the Word and who are kind, gentle, humble, forgiving and generous, will enter Heaven before the charlatans who try to hide their evil nature by twisting the Word. The best way to protect ourselves from the false is to take refuge in the truth.

“Not everyone who says to me, ‘Lord, Lord,’ will enter the kingdom of heaven, but the one who does the will of my Father who is in heaven.”  – Matthew 7:21