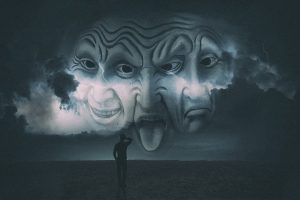 You’ve probably heard a lot of people lately in person, on social media and in the news, who have a very high opinion of themselves. These are the folks who boast that they’re moral, upstanding, good citizens who love and serve God. But do they?

It has always been of deep concern to me that the very people who most loudly proclaim their righteousness, are typically, the polar opposite. In every sense of the word, these individuals speak like a lamb, but act like a lion. Quick to judge and condemn others, these self-appointed morally superior people, call out and rage about the sins of others, yet is is very often they who have the darkest and cruelest of hearts — often, they are most guilty of the transgressions they accuse others of committing.

We know that this isn’t a new phenomena by any means, but it has gotten much worse in the last few years. This mass hypocrisy has become so prevalent among some, that it begs the question: “How can these people think they’re good Americans or good Christians, when they speak and act in a manner that directly conflicts with the very things that do make someone a good American or good Christian?” Perhaps they not see their own toxic hypocrisy, or maybe they do, but they just don’t care? Are they unhinged? Perhaps they’re suffering from a form of mental illness? I just don’t know, but it got me to thinking of Proverbs 15:

A gentle answer turns away wrath,
but a harsh word stirs up anger.

The tongue of the wise adorns knowledge,
but the mouth of the fool gushes folly.

The eyes of the Lord are everywhere,
keeping watch on the wicked and the good.

The soothing tongue is a tree of life,
but a perverse tongue crushes the spirit.

A fool spurns a parent’s discipline,
but whoever heeds correction shows prudence.

The house of the righteous contains great treasure,
but the income of the wicked brings ruin.

The lips of the wise spread knowledge,
but the hearts of fools are not upright.

The Lord detests the sacrifice of the wicked,
but the prayer of the upright pleases him.

The Lord detests the way of the wicked,
but he loves those who pursue righteousness.

Stern discipline awaits anyone who leaves the path;
the one who hates correction will die.

Death and Destruction lie open before the Lord—
how much more do human hearts!

Mockers resent correction,
so they avoid the wise.

A happy heart makes the face cheerful,
but heartache crushes the spirit.

The discerning heart seeks knowledge,
but the mouth of a fool feeds on folly.

All the days of the oppressed are wretched,
but the cheerful heart has a continual feast.

Better a little with the fear of the Lord
than great wealth with turmoil.

Better a small serving of vegetables with love
than a fattened calf with hatred.

A hot-tempered person stirs up conflict,
but the one who is patient calms a quarrel.

The way of the sluggard is blocked with thorns,
but the path of the upright is a highway.

A wise son brings joy to his father,
but a foolish man despises his mother.

Folly brings joy to one who has no sense,
but whoever has understanding keeps a straight course.

Plans fail for lack of counsel,
but with many advisers they succeed.

A person finds joy in giving an apt reply—
and how good is a timely word!

The path of life leads upward for the prudent
to keep them from going down to the realm of the dead.

The Lord tears down the house of the proud,
but he sets the widow’s boundary stones in place.

The Lord detests the thoughts of the wicked,
but gracious words are pure in his sight.

The greedy bring ruin to their households,
but the one who hates bribes will live.

The heart of the righteous weighs its answers,
but the mouth of the wicked gushes evil.

The Lord is far from the wicked,
but he hears the prayer of the righteous.

Light in a messenger’s eyes brings joy to the heart,
and good news gives health to the bones.

Whoever heeds life-giving correction
will be at home among the wise.

Those who disregard discipline despise themselves,
but the one who heeds correction gains understanding.

Wisdom’s instruction is to fear the Lord,
and humility comes before honor.

Essential Meaning of hypocrite
disapproving : a person who claims or pretends to have certain beliefs about what is right but who behaves in a way that disagrees with those beliefs; the hypocrites who criticize other people for not voting but who don’t always vote themselves

Full Definition of hypocrite:
1 : a person who puts on a false appearance of virtue or religion
2 : a person who acts in contradiction to his or her stated beliefs or feelings

What does Proverbs 15 teach us? I think it gives us a guideline of how to live our life, but also teaches us very powerful lessons that we ignore at our peril:

Hypocrisy, whether one is a Christian or not, is a toxic behavior because it is rooted in dishonesty, hubris and outright deceit. It’s very disheartening that some people in our world are so falsely self-righteous, because they are deceiving themselves and others with their false piety — its also worse when they harshly judge and condemn others, because they are attacking people for things they themselves are usually more guilty of.

I believe that Proverbs 15 makes it clear that those who are corrupt, greedy, deceitful, boastful, hypocritical and cruel, are far from God. Very far indeed. So to those who have falsely laid claim to the notion that they are “good” Christians or “good” Americans, we ask: “Are you…are you really?”