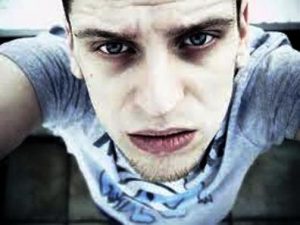 Have you ever had someone give you a nasty or judgemental look — you know the type of look I mean — that condescending, snide look that makes your face flush with embarrassment? If you’ve never experienced that kind of contemptible attitude, you’re lucky, because most of us experience it at one time or another.

We live in a very hypocritically judgmental world today. If we look different, act different, speak different and even think differently, there are some people who will harshly judge us for those differences. There is of course a distinction between making an innocent observation about someone vs. judging them. Say for example you meet someone at a party who doesn’t speak English:

One type of person might observe: “He seems so nice! He’s struggling with the language, but he made such a great effort to get to know people and he’s got a great personality.”

As is too often the case today, one might judge: “Did you get a load of that guy who couldn’t speak a word of English. I wanted to say “Hey, buddy, learn the language if you’re going to come to my country. He’s probably here illegally anyway.”

The difference between both hypothetical reactions is pretty clear, because in the first, a factual, non-judgemental observation is being made that the man didn’t speak English. In the other however, he is being judged harshly due to assumptions being made about him, which may not be true, relevant or even remotely important.

We’ve been sharing the Parables in recent months because the lessons they teach have withstood the test of time — they are as relevant today as they were when Christ shared them with the people of His day.

The speck and the log is a popular parable and for good reason:

“Do not judge, or you too will be judged. For in the same way you judge others, you will be judged, and with the measure you use, it will be measured to you. Why do you look at the speck of sawdust in your brother’s eye and pay no attention to the plank in your own eye? How can you say to your brother, ‘Let me take the speck out of your eye,’ when all the time there is a plank in your own eye? You hypocrite, first take the plank out of your own eye, and then you will see clearly to remove the speck from your brother’s eye.”

Jesus explains what type of judging He is talking about through the parable “Why do you look at the speck of sawdust in your brother’s eye and pay no attention to the plank in your own eye?” Jesus is talking about the hypocritical type of judgment in which we are quick to point out and even exploit, the perceived wrong in the lives of others, while ignoring the wrongs or short-comings in our own life. It’s also important to recognize that the parable ends with “You hypocrite, first take the plank out of your own eye, and then you will see clearly to remove the speck from your brother’s eye.”

Personally, I don’t believe this means that once you do remove the plank you are free to judge harshly, but more that once you have removed the plank out or your own eye, you are then in a better position to help your brother as opposed to judging him.

This parable of course is often misused, as some take it to mean one should never judge another. We do at times need to “judge,” but more in observing and concluding so we can determine truly good and truly evil and know the difference between right and wrong. So this parable isn’t saying we can’t use critical and reflective thinking, but rather, is warning us about the type of judgmental attitudes that try to make others look like less than we believe ourselves to be, by pointing out their flaws, without acknowledging our own.

Today, we have a great deal of hypocritical and arrogant judging going on. People are quick to ridicule someone because of their race, religion, gender, sexual orientation, national origin or political affiliation. Why do we do this, when in truth, we are all equal and no other person is below, or above us?

One of the beautiful things about the Parables is that they aren’t just for Christians —  they teach us valuable lessons that apply to every one of us. I particularly like this parable because it encourages us to stop and think — “Am I being critical and judging another person, when I myself am not without flaw and fault? Am I judging someone simply because they’re a different race or religion? Am I belittling someone because they speak a different language than I do?”

If we all accepted our differences and celebrated them as positives, perhaps there would be more harmony in the world. To have true positivity in our life, we need to let go of unjust judgment. Today is a good day to get that plank out of our own eye, before we rush to tell someone they have a speck in theirs.

“…but Jesus went to the Mount of Olives.

At dawn he appeared again in the temple courts, where all the people gathered around him, and he sat down to teach them. The teachers of the law and the Pharisees brought in a woman caught in adultery. They made her stand before the group and said to Jesus, “Teacher, this woman was caught in the act of adultery. In the Law Moses commanded us to stone such women. Now what do you say?” They were using this question as a trap, in order to have a basis for accusing him.

But Jesus bent down and started to write on the ground with his finger. When they kept on questioning him, he straightened up and said to them, “Let any one of you who is without sin be the first to throw a stone at her.” Again he stooped down and wrote on the ground.

At this, those who heard began to go away one at a time, the older ones first, until only Jesus was left, with the woman still standing there.  Jesus straightened up and asked her, “Woman, where are they? Has no one condemned you?”

“Then neither do I condemn you,” Jesus declared. “Go now and leave your life of sin.”