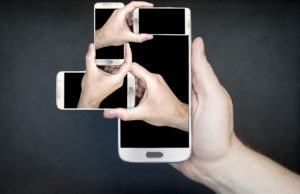 Scroll. Like. Emoticon. Tweet. Post. These words have seemingly consumed our daily lives. Are the days of living life in the real, physical world gone, only to be replaced by the internet? Have we become so consumed with posting and tweeting that we now see every moment as something to post into cyberspace?

Recently at a small gathering, I was introduced to a woman and her daughter and as I’m being introduced, the woman was doing something on her cell — not talking mind you — and as our host introduced me, the woman, not bothering to even look up, said “oh, hey, nice to meet you.” Okay, so kind of rude, but I thought that perhaps she was doing something for her job, but still, she never bothered to even make eye contact with me and as more guests arrived, she continued thumping on her phone. Our host the introduced me to this woman’s daughter, who was sitting off by herself — and like her mother, she had her face glued to her phone, totally engrossed and completely dis-interested in meeting me or in interacting with anyone.

My questions are: a). Couldn’t posting those pictures have waited until after the gathering? b). What is so pressing on social media that these two guests made posting and liking a priority over socializing and interacting with their friends? I have a lot more thoughts and questions but perhaps the biggest one is, wondering what this type of behavior is doing to society. Clearly, both mother and daughter see life as taking place in cyberspace and not in the physical world. If they’re this self-absorbed at a social gathering, what dynamics do they have at home? Is there any warmness or meaningful interaction in their family?

One might try to explain away their behavior, but we shouldn’t, because there is no explaining it away. We see this everywhere we go, whether its in a restaurant, a grocery store or even at work and school. To be frank, I don’t know if its an addiction to technology or just to social media. Regardless if its either or both, the result is the same: people are wasting precious time posting, tweeting, liking and sharing and lately, most don’t even have the courtesy to type out a comment, but just use emoticons.

Perhaps I seem harsh and I suppose on some level I am being harsh, but sometimes, we just need to come right out and say it: life is never, ever going to happen in cyberspace and the more time we spend rushing to post and checking the number of likes, the less time we have to actually live life in the moment.

Not a Cruelty Free Zone

One could possibly argue that while engaging with friends and family on Facebook or Instagram isn’t exactly negative, the same cannot be said for social media in general. Spending any significant time on social media quickly reveals its very dark and dangerous side: hate and anger. The internet is seething with people who are consumed with anger, bitterness, paranoia and outright hatred. I don’t know if the people who spread the hate and anger are the minority, or the majority, because the internet enables people to post/comment the most horrendous things to people and about other people.

The anonymity of social media has made it not only possible, but quite easy, for anyone to spread lies, hatred and rage, all without having to face their victim. People are increasingly lashing out, posting  rude remarks, personal attacks and insults, which unleashes a torrent of  hostility from like-minded people. This crescendo of meanness, bigotry and animosity is so toxic and it feeds a culture of hatred, stress, paranoia and misunderstanding.

The real question is, did social media create this venue for spreading hatred and rage, or was it there and it just gave people the easy opportunity to show their true self? Are people so consumed with surfing the web and social media platforms because their lives are empty? We can guess at the answers, but in truth, the fact is that people are missing out on life because they’re so busy focusing on a digital version of themselves.

This is not to say social media or the internet are evil, but we have to ask ourselves if we’re spending too much time on our devices and social media. I worry that a lot of people are living their life in cyberspace and wonder what kind of memories they’ll have to look back on. Life and its precious moments are found in the world around us and not online.

This short quotes collection sums it up nicely:

“Don’t believe the noise. Those mean, petty, hateful voices will never be the majority. They only seem loud and pervasive, because they have the idle time to broadcast their negativity. The rest of us are too busy with real efforts to make the world a better place.”― Anthon St. Maarten

“The thought process that went into building these applications, Facebook being the first of them, . . . was all about: “How do we consume as much of your time and conscious attention as possible?” And that means that we need to sort of give you a little dopamine hit every once in a while, because someone liked or commented on a photo or a post or whatever.” ― Cal Newport

“There is a valid reason social media is linked to depression and loneliness. We live in a time when many people spend countless hours a day online strolling through the timeline of others with envy, regret, and little appreciation for their own life.” ― Germany Kent

“I think there should be regulations on social media to the degree that it negatively affects the public good.” – Elon Musk

“Our attention spans have been reduced by the immediate gratification provided by smartphones and social media.” – Katherine Ryan

“Social media has given us this idea that we should all have a posse of friends when in reality, if we have one or two really good friends, we are lucky.” – Brene Brown

“Your morning sets up the success of your day. So many people wake up and immediately check text messages, emails, and social media. I use my first hour awake for my morning routine of breakfast and meditation to prepare myself.” – Caroline Ghosn