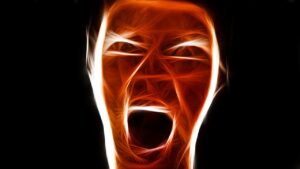 Why are people so angry? Is it the pandemic? Politics? The News? Perhaps, it’s all of these reasons and more. These days, people are losing their cool and simmering in anger and the people they’re hurting most, is themselves. Anger is, without a doubt, a spirit crusher.

I personally believe people are so angry because we’re being manipulated and and harassed in such a way that we’re subconsciously getting more and more anxious, bitter, afraid and stressed. Today, we have the never ending “breaking news cycle,” social media, 24×7 news and a very toxic and unhealthy obsession with politics — these elements have all come together to create a whirlwind of negative news and engineered anxiety. Think about the politicians who are incapable of working together — rather than being good leaders, they’re spreading hysteria and fear and with 24 x 7 news and social media, their fear mongering, which is purely self-serving, is being broadcast out to us in almost instant communication.

People are angry and its politicians, the news media, social media and talking head pundits who are causing it. Talk to a friend calmly, even one from the opposing political party and you one quickly learns that all of us are keenly aware that this is happening, but we keep letting ourselves get caught up in the maelstrom. The reason for this is because even though we know deep down we shouldn’t let it affect us, anger is one of those evil and toxic emotions that if left unchecked, quickly takes over — we become obstinate and dig in, refusing to bend on any level. This mentality is extremely unhealthy for us, both mentally and physically.

What Can We Do?

The first thing is to just face up to it — admit the anger and admit the source. You may love your political party, but the fact is, both parties are using us and turning us against each other by creating exaggerated fear and outright lies — only we can stop this deceitful tactic by refusing to be a victim. Once we acknowledge the anger, we have to fully commit to addressing it and getting it out of our system. I did something about it by writing and calling all of my elected representatives — I told them what I supported and did not support and I told them in no uncertain terms that the fear mongering and political divide they’ve created had to stop.  Being in control and openly communicating to our elected representatives is very liberating and much more productive than hashing it out on social media. Now, as for social media, it’s a huge problem because so many people on Facebook and Twitter are simply on their to vent, exaggerate, complain and spread misinformation. As for the political pundit talking heads, whether liberal or conservative, they’re all very well paid to stir up controversy. Their job is to get viewers and clicks and they can and do use whatever means they can to do so…even lying and using false fear tactics.

To get rid of our anger, we should either leave those platforms or simply ignore the hate and aggression and focus only on the positive — it can be done, but one has to be willing to take control and make the changes necessary.

Read these wise quotes on anger and you’ll quickly see that it is a toxic and personally destructive emotion:

“Anger is an acid that can do more harm to the vessel in which it is stored than to anything on which it is poured.”  – Mark Twain

“Anybody can become angry – that is easy, but to be angry with the right person and to the right degree and at the right time and for the right purpose, and in the right way – that is not within everybody’s power and is not easy.” – Aristotle

“Anger is a killing thing: it kills the man who angers, for each rage leaves him less than he had been before – it takes something from him.” – Louis L’Amour

“Anger makes you smaller, while forgiveness forces you to grow beyond what you were.” – Chérie Carter-Scott

“Every day we have plenty of opportunities to get angry, stressed or offended. But what you’re doing when you indulge these negative emotions is giving something outside yourself power over your happiness. You can choose to not let little things upset you.” –  Joel Osteen

“Every time you get angry, you poison your own system.” – Alfred A. Montapert

“There’s nothing wrong with anger provided you use it constructively.” – Wayne Dyer

“If a small thing has the power to make you angry, does that not indicate something about your size?” – Sydney J. Harris

“Anger is a momentary madness, so control your passion or it will control you.” – G. M. Trevelyan

“When angry count to ten before you speak. If very angry, count to one hundred.” – Thomas Jefferson

“People won’t have time for you if you are always angry or complaining.” – Stephen Hawking

The danger from unchecked and excessive anger cannot be over-stated. Unproductive anger always has and always will drain us of positivity and cause us great mental and physical harm. Let us all stop falling for the lies and manipulation and put things into proper perspective by using more effective and productive means for conveying our will to our political leaders. The choice to reject anger and bitterness is freely available to all of us, so we just have to be willing to put our happiness and mental health first.