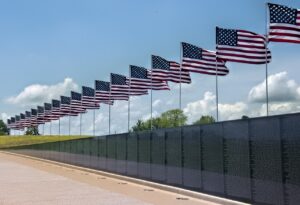 The issue of the acrimonious political divide in our country is obvious to everyone. People are increasingly concerned about the battle of right vs. left and talking about the effects the political dysfunction is having on our mental health. Ironically, healing our country is  relatively simple, but are people willing to try?

I for one am tired of the extreme right and left in our country. Both sides of the extreme fringes are in a war of words and wills with each other, and they’ve dragged the rest of us into their battle — I say rest of us, because the truth is, most Americans are politically moderate, regardless of whether they’re Republican or Democrat.

Our elected political leaders are very much to blame for the divide in our country, because they’re not doing their job and they’re not running for office on their accomplishments, but instead, come out of the gate vilifying their opponent, using a scorched earth approach to campaigning. With social media and highly partisan news programs, what those politicians say and do spreads like wildfire and the result is a very divided nation. In essence, these unscrupulous politicians have turned the American people into their personal Army.

We’re Letting Ourselves Be Divided

While politicians and biased news organizations are the ones creating the divide, the American people are the ones allowing it to spill over into our daily lives. Americans have become obsessed with politics and spend hours surfing news sites, social media and glued to highly paid talking heads on the news channels — we’re being drawn into a battle that we have full and complete power to reject…if we want to.

“Existential fear appears to be at the heart of what drives polarization,” says Kirk Schneider, PhD, adjunct faculty at Saybrook University in California and Teachers College, Columbia University in New York.

“One reason we tend to become fixated and polarized is because of individual and collective trauma that associates with a profound sense of insignificance,” says Schneider. In this state, people may feel that they don’t matter and fear “ultimately being wiped away or extinguished,” he adds (The polarized mind: Why it’s killing us and what we can do about it, 2013, University Professors Press). – Healing the Political Divide, American Psychological Association

Politicians and the news media have a vested interest in creating anxiety and borderline hysteria — Democrats and Republicans use manufactured crisis, exaggerations and out right lies to stir their base into action — that action, they hope, is to vote only for them and to give them money. In other words, the American people, without doubt, are being used and abused and we’re letting it happen.

Believe it or not, there are a lot of people who may identify as “Democrat” or “Republican,” but who are quite calm and moderate — they reject extremism and tend not to fall for the deception, so they calmly explore the issues, using multiple sources and only then, come to a conclusion. However, a lot of Americans, clearly too many, use the lazy way by getting their news solely from a headline, a talking head or worse, social media — they don’t take the time to really look into an issue, but instead, let the politician or political pundit tell them how they should feel, react and vote. This, is a very serious problem — if one is going to let themselves be led, one must be prepared to accept that very often, they will be led down the wrong path. Given how easy it is to use Google and other such resources, there is absolutely no excuse for Americans to be spoon fed their reality and truth — it takes no time at all to do some research on the issues and decide for our self.

“Historians who have studied the rise and fall of democracies have converged on precisely these factors – dehumanization of political opponents, acceptance of violence as a means to achieve political ends and the belief that government is controlled by self-serving elites – as principal indicators of democratic decline and slippage toward authoritarianism.” – Michael Murphy and Jay Kosminsky, The Hill

This Memorial Day, in addition to the Flags and parades, Americans should do something even more valuable — Americans should remember that all of our fallen military personnel put their lives on the line to to defend Democracy. Our brave men and women in uniform risk life and limb to ensure that we have freedom and liberty and that means being able to speak our mind, vote without fear and live in an open, just society. If you’re paying attention, you know that the very things our Armed services try to protect, are the things the average American is just letting slip away — how sad and ungrateful that is.

To truly honor past and present members of our Armed Services, please try to heal our nation with some of these commitments:

1. Commit to putting country over party. Our armed services do it every single day — they put country ahead of party and so should we. We should never unquestioningly believe something just because a politician or TV talking head tells us something — we should always verify it with several sources.

2. Accept that we are being played and used. Some politicians will do or say anything to win or get a donation, so we should accept that quite a few of them are unscrupulous and will use manufactured crisis and instill hysteria to get our vote and our money. We have the power to stop them, by refusing to fall for their unethical tactics.

3. Make a promise to be civil. We have always had differences of political opinion in this country, but it wasn’t this bitter. Its okay to believe differently from our neighbor — just because they don’t support a position you hold, doesn’t mean they hate you. We all have different views and if we’re confident in our beliefs, we should prove it by accepting that others may disagree and remain calm and courteous. When it comes to social media, we should be very careful — what we read on there is often intentionally misleading and inciteful words spread by trolls and foreign adversaries. We should be wary of letting ourselves get too worked up by what we read on social media and probably an even better idea, is to drastically limit our time on social media.

4. Do the work. If you want changes in our country, that change is not going to happen just because we rage tweet. The only way change happens by the will of the people, is if we take the time to call, write and meet with our elected Representatives — it’s their job to listen to us…so make sure you tell them what it is you expect.

5. Don’t rely on just one news source for your political information. Social media is not the place to get political information, because it is rife with false stories, absurd conspiracy theories and tainted personal bias. Likewise, the 24 x 7 news channels are in the business to make money and the more hype they can pump out, the more viewers they get — trust them for all of your political news at your own risk. The better solution is to have a few reliable, proven unbiased sources and rely on them.

Our veterans fought tyranny and oppression by defeating authoritarian dictators, so if we claim we honor those fallen heroes, then we should do so not just in words, but in action — put the nation’s good ahead of political party and elect leaders who support our constitution, who truly love freedom and who are committed to rights and equality for all — as our founders intended.

“Always vote for principle, though you may vote alone, and you may cherish the sweetest reflection that your vote is never lost.” –  John Quincy Adams

Healing the political divide: How did we become such a divided nation, and how can psychologists help us bridge the gap?

America Is Being Pulled Apart. Here’s How We Can Start to Heal Our Nation

Beyond Red vs. Blue: The Political Typology