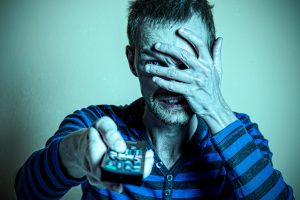 In the movie Wall Street, Michael Douglas’s character makes a speech in which he says “greed is good…greed works.” His premise being that he is greedy and that it’s okay to be greedy for more…more money, power and fame. Of course, he is categorically incorrect, as most of us already know.

Too much of something, such as greed, envy, anger or hubris, is never, ever good. Being eager and and focused on success isn’t a bad thing, so we’re not talking about”gumption” and drive, but rather, about unbridled greed. Excessive greed or the need to do everything to excess causes incredible harm to our mind and body, because it leads to a restlessness and unending need for more and more — how can one ever be happy and settled if they always crave more?

Similar to unbridled greed or anger being extremely negative, is the use of fear to coerce people. Increasingly, we see the use of fear or emotional coercion tactics to get people to watch “their” news program, read their newspaper or click on their “news” story. I’m confident you see it too, as its become such a wide-spread tactic that it’s almost impossible to miss. I’ve done some digging on this and it turns out, “they” use fear and sadness to market and sell almost everything these days. Gone are the days of fun, upbeat commercials with a nifty jingle…they’ve been replaced with some sad, dire story, or a pharmaceutical ad that forces us to think of terrible things.

Of course, most of us have noticed that the news media is the biggest culprit in using fear and sadness. Personally, I believe this is because of the 24 x 7 news channels or the 3-hour long morning “news” programs — they need to fill the air with something and for them, hyping and sensationalizing a story is their go-to strategy.

I recently read a quote from the TV show The X-Files, in which lead character Fox Mulder says: “Fear. It’s the oldest tool of power. If you’re distracted by the fear of those around you, it keeps you from seeing the actions of those above.”

Truth!  Politicians, the wealthy and famous…all have used fear as a means to prop themselves up. Keep the people afraid and they’ll be so distracted by the fear itself, they’ll give up more of their personal power, just to be protected by the very people making up the things we are allegedly supposed to be afraid of.  Now of course, fear works both ways, so sometimes, we think we’re rejecting fear because we refuse to be falsely intimidated, only to discover that the people who told us to reject the fear, used fear themselves…to get you do do what they wanted.

Take for example the pandemic. The reality is, it’s happening. The virus is real, the dangers are real the risks are very real. We know this because it is a global pandemic affecting pretty much everyone on the planet and we know this because countless medical professionals and scientists have given us irrefutable proof that its real  — and millions of people have had it and far, far too many have lost their lives to it. Thus, it is a fact and denying it is most unhelpful.

What has happened is that fear has now permeated almost every aspect of daily life: politicians use it to win and stay in power; the media uses it to get you to watch or click; the pharmaceutical industry uses it for pretty much everything; religion uses it to keep you in line. Basically, we’re being condition to be in a constant state of fear. So with the pandemic, one political party decided to deny it and said “they’re just using fear….” and yet that is precisely the tactic they used to get some people to call it a hoax, by also using fear along these lines “they’re just trying to scare us all so they can (fill in any number of reasons used).” So the ones accusing the others of using fear, themselves employed that tactic. Its a vicious, cruel and very dangerous cycle of abuse by all concerned.

Of course some people might say that, as one example, fear was used to hype the pandemic. But was it?  We have to remember that it’s called a Novel virus for a reason — it’s new and as such, there were, and still are, many unknowns. There was no way scientists and medical professionals could know what the virus would wrought, so an over abundance of caution was and is, necessary. After all, we’re afraid to put a wet finger in an electric socket because we fear what will happen…that’s we’ll get electrocuted. So fear of that, instilled in us by our parents, works. But the difference between fear and caution can be very murky. As it pertains to the pandemic, yes, perhaps some in the news media used excessive fear. But that doesn’t mean we just ignore it all and foolishly decide to abandon all reason — its real, its awful and its dangerous. But because we’re being so overwhelmed with the use of fear in politics, the media and religion, I think we’ve in some way lost the ability to discern what is a fear tactic, as opposed to something we genuinely should be fearful of.

“You gain strength, courage and confidence by every experience in which you really stop to look fear in the face. You are able to say to yourself, ‘I have lived through this horror. I can take the next thing that comes along.’ You must do the thing you think you cannot do.” — Eleanor Roosevelt

In my humble opinion, politicians and the news media are the two biggest purveyors of fear. Politicians want us scared and divided because that keeps them in power. The more “scared” we are, the more they can ride to the rescue. The more one vilifies the other, the more extreme we become in our opposing political views. But, if you talk to people on both sides of the political aisle, you usually discover that most of us are more middle of the road than off to the extreme right or left. So why do we let “them” exert fear over us? How can we stop this tactic?  Good questions that need answers. I suppose the simplest one is to reject it:

I said earlier that there are some thing we do need to be cautious about, such as the pandemic. So how do we know when we genuinely need to be concerned or, for lack of a better word, afraid? Good question and because fear as a tactic has been so abused, the answers aren’t as clear as they used to be. I know from my perspective, I did a great deal of research on the pandemic and learned facts from many different experts and sources — this enabled me to evaluate the risk and to conclude that the risk was and is, very real. I also tend to rely on many different news sources in general and avoid TV news. I like reading news from sources that I know are far less biased, such as, for example, NPR, AP, Reuters and BBC America, to name a few. Its important that we all be much better informed and have an open mind when it comes to news, so that we are more equipped to know what is real and what is fake.

Fear as a false weapon of coercion is a terrible emotion to use against people. Its like the boy who cried wolf and the things we should be afraid of, we’re not and the things we may not really need to fear…we do. Its a bit of a mess and the only way to change things is for all of us to say “enough is enough.”

“Nothing in life is to be feared. It is only to be understood.” — Marie Curie

“Have I not commanded you? Be strong and courageous. Do not be frightened, and do not be dismayed, for the Lord your God is with you wherever you go.” — Joshua 1:9

View all posts by P. Norman