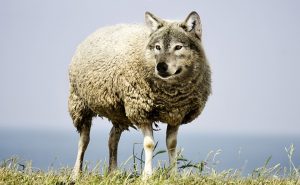 Most of us are acutely aware of the old expression “a Wolf in Sheep’s clothing.” The gist of that adage is that there are those among us who will seem like Sheep, but inwardly, are actually ravenous and dangerous Wolves. The Bible covers this caution in significant detail.

With the advent of social media, we are seeing a lot more Wolves who pretend to be Sheep — I say seeing more because odds are great, they have always been among us, but they didn’t have the means to spread their thinly veiled hatred as easily as they do with modern media technologies.

Ever Met a Wolf?

Recently, I came across a gentleman on Twitter who is running for Congress — his name isn’t relevant, but his inner-wolf is. At first glance, this man presents himself as focused, capable, patriotic and according to him, a devout Christian. He seems harmless enough until he “speaks” and tweets and then, the Wolf throws off the Sheep’s disguise and we get a glimpse of the real man — a man who is cold, calculating and even cruel. Let me explain: bearing in mind that he claims to want to help and heal our nation and that his Christian values will enable him to do that, he can’t help himself though, and his true nature comes out, spewing out views and attitudes that are absolutely un-Christian. For example, on the issue of “illegal” immigration, he wrote (paraphrasing) “I wouldn’t let them anywhere near our country and if they did make it over our borders, I’d throw them right back down below the border.” Or this gem (paraphrasing) “they don’t belong here and we don’ want them here!” This candidate for Congress rants and raves about how horrible Democrats are, rages against the less fortunate and in general, espouses extremely cruel and inappropriate things. This Wolf you see, is a deceiver and under the facade of a Sheep, he is actually selfish, uncaring, calculating and eager to create division and strife.

“If anyone teaches a different doctrine and does not agree with the sound words of our Lord Jesus Christ and the teaching that accords with godliness, he is puffed up with conceit and understands nothing. He has an unhealthy craving for controversy and for quarrels about words, which produce envy, dissension, slander, evil suspicions, and constant friction among people who are depraved in mind and deprived of the truth, imagining that godliness is a means of gain.” – 1 Timothy 6:3-5

“Beware of false prophets, who come to you in sheep’s clothing but inwardly are ravenous wolves.” – Matthew 7:15

Claiming to be a devout Christian, this toxic politician seems almost oblivious to the fact that his words and actions betray his true heart — chiefly, that he is anything but a true, good Christian. One cannot simply say “I’m a Christian” and sit in a Church pew now and then to prove it — being a true and good Christian absolutely, without any doubt, means living it each and every day. Of course, none of us are perfect and we may lose our temper and say something we truly don’t mean, but when someone so flagrantly and repeatedly pours out divisiveness, hatred and cruelty, its not a one-off — that person is consumed with negative and dark views and emotions.

“I appeal to you, brothers, to watch out for those who cause divisions and create obstacles contrary to the doctrine that you have been taught; avoid them. For such persons do not serve our Lord Christ, but their own appetites, and by smooth talk and flattery they deceive the hearts of the naive.” – Romans 16:17-18

Many people today claim to be Christian, yet fail to actually understand what that means. For them, its a label that they believe makes them somehow good and righteous and they make no effort to truly live their faith. What is equally disturbing, is that a great many of these people have dragged the faith into politics and in doing so, have actually caused many people to abandon the Christian faith — in truth, these false Christians are tarnishing the faith and their hypocrisy is causing a significant falling away.

To be a true Christian who genuinely puts Christ at the center of our life, we must believe in and follow Jesus’s teachings, such as these:

Love. Jesus told us to love God above all and in Matthew 22:37-39, teaches us: “Jesus said unto him, Thou shalt love the Lord thy God with all thy heart, and with all thy soul, and with all thy mind. This is the first and great commandment. And the second is like unto it, Thou shalt love thy neighbor as thyself.”  This is crystal clear — we are to love God above all and also love our neighbor as we love ourselves — our neighbor isn’t just the people next door, but rather, is all of our brothers and sisters.

Kindness. “Be kind to one another, tenderhearted, forgiving one another, as God in Christ forgave you.”- Ephesians 4:32. Jesus teaches us that we should be kind and gentle…not just to those people we love, but to all people.

Compassion and Generosity. This man who claims to be a “good Christian” and who is running for public office, could not care less about helping others. I do not care what one’s political beliefs are — the fact is, if one claims to be a “good Christian,” one must, without doubt, be kind of heart and spirit — that is not negotiable.  Two such Bible passages that show this:

“Whoever is kind to the poor lends to the LORD, and he will reward them for what they have done.” – Proverbs 19:17

These are just three of the tenets of Christianity and we should never forget that we are also called to:

Back to That Wolf…

Like millions of people, I am not only alarmed at the audacity of false Christians, who seem emboldened to go out into the world to deceive, but I’m equally concerned with how many people are falling for the deceit, typically in the name of politics. We’ve been warned to be on watch for false prophets and deceivers, so why are so many people falling for their tricks?

“Beware of false prophets, who come to you in sheep’s clothing but inwardly are ravenous wolves. You will recognize them by their fruits. Are grapes gathered from thornbushes, or figs from thistles? So, every healthy tree bears good fruit, but the diseased tree bears bad fruit. A healthy tree cannot bear bad fruit, nor can a diseased tree bear good fruit. Every tree that does not bear good fruit is cut down and thrown into the fire…” – Matthew 7:15-23

Had this political candidate not claimed to be a devout Christian, I might have just dismissed him as someone who has views and opinions contrary to my own. But the moment he proclaimed himself to be a good Christian, we should all have an issue with him. Jesus and His Word and teachings are the manifestation of God’s will. Anyone who claims to be a Christian, yet knowingly speaks and acts in direct conflict with what Christ teaches, is in essence, an anti-Christ. That may sound judgmental and like a condemnation, but its really a discerning of good vs. evil — is this man and those like him evil? Perhaps not truly evil, but rest assured, some surely are.

By claiming to be a Christian, yet rejecting the will of God and the very tenets of Christianity, the false Christian is committing an act of open rebellion. The will of God and the teachings of Jesus do not bend to our will — we are to bend our will to follow theirs. Christ is Christianity and anyone flagrantly rejecting His word, while claiming to be a “good Christian,” is an anti-Christ. Again, that may sound harsh, but I firmly believe that those who strive to be good and true Christians, have an obligation to reject false ones. Our faith is centered on love, compassion, generosity, kindness, forgiveness and peace and it is our calling to share these things with all people, even those we may think of as an enemy. In my humble opinion, to elect a knowingly false Christian to any political office, is tantamount to endorsing their deceit.

“For the time is coming when people will not endure sound teaching, but having itching ears they will accumulate for themselves teachers to suit their own passions…” – 2 Timothy 4:3

“See to it that no one takes you captive by philosophy and empty deceit, according to human tradition, according to the elemental spirits of the world, and not according to Christ.” – Colossians 2:8