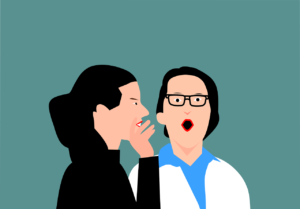 In order to be more positive and thus, less negative, it’s necessary for us to let go of any toxic emotions, behaviors and habits that are holding us back. We all know that anger, jealousy and hatred are three of the big ones, but one we sometimes overlook, is gossip — and gossip is very toxic.

Gossip, rumors and even conspiracy theories, are extremely toxic and until we let go of them, we may never experience true positivity. After all, engaging in gossip and spreading rumors or untruths, is a form of deceit, which is in essence a lie.

Rumors are tidbits of information or a tale that hasn’t been vetted as being true and accurate. The person telling the “story” is spreading a rumor, because they don’t know for sure if it’s true or not — almost always, the person spreading the rumor doesn’t even attempt to verify its veracity, so they really don’t care whether its true or false.

Gossip, while similar to a rumor, is more about spreading what’s thought to be a “juicy” story or detail, which typically involves “information” that is meant to be shocking and personal and is very often hurtful to another person (usually the subject of the gossip/rumor).

Conspiracy theories, which have grown in use these last few years, are particularly dangerous and toxic. The person or group starting the conspiracy theory, reject the most believable, often proven and factual conclusions and replace them with what are often outlandish and sometimes defamatory stories. People who start and believe conspiracy theories, are often harboring a bias or prejudice and unable to accept the truth, they knowingly create a lie in an effort to distract from the truth.

The story of the “Sieve of Truth” is an excellent lesson in the dangers of falling victim to gossip, rumors and conspiracy theories:

Once upon a time in ancient Greece, one of the acquaintances of the great philosopher Socrates came up to him and said: “Socrates, do you know what I just heard about one of your students?”

“Hold on a moment,” Socrates replied. “Before you tell me, I would like to perform a simple test. It is called the ‘Three Sieves Test.’ ”

“Yes. Before you say a word about my student, take a moment to reflect carefully on what you wish to say by pouring your words through three special sieves.”

“The first sieve,” said Socrates, “is the Sieve of Truth. Are you absolutely sure, without any doubt, that what you are about to tell me is true?”

“Well, no, I’m not. Actually I heard it recently and…”

“Alright,” interrupted Socrates. “So you don’t really know whether it is true or not. Then let us try the second sieve: the Sieve of Goodness. Are you going to tell me something good about my student?”

“Well…no,” said his acquaintance. “On the contrary…”

“So you want to tell me something bad about him,” questioned Socrates, “even though you are not certain if it is true or not?”

“So,” said Socrates, “you may still pass the test though, because there is a third sieve: the Sieve of Usefulness. Is what you want to tell me about my student going to be useful to me?”

“No, not really useful” said the man resignedly.

Finishing the lesson, Socrates said: “Well, then, if what you want to tell me is neither true nor good nor useful, why bother telling me at all?”

Sifting what we want to tell people about others or about an event, is an excellent idea. If its not been verified, if its not something good and if its not at all useful to the person you’re telling, then why tell it? If we read a story and are upset that the facts go against our own bias/agenda, why on earth would we create or fall for, a blatant lie to replace the truth? Truth, while not always easy to accept, is really a key ingredient to being a happy, centered and positive person. Much good goes along with having a moral compass, and that compass is one we should check and tune regularly.

We can improve ourselves and heal our world one step at a time. Avoiding gossip, not spreading rumors and not perpetuating harmful conspiracy theories, is a really good place to start.

“Watch out for the joy-stealers: gossip, criticism, complaining, faultfinding, and a negative, judgmental attitude.”  – Joyce Meyer

“Whoever gossips to you, will gossip about you.” – Spanish Proverb

“Be cautious with what you feed your mind and soul. Fuel yourself with positivity and let that fuel propel you into positive action.” – Steve Maraboli