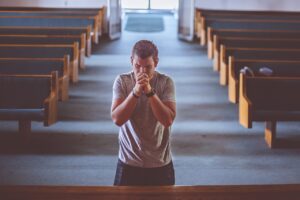 The morally self-righteous are usually not moral at all. Sure, they do a lot of judging and condemning, and they can be quite preachy and they certainly can quote the Bible. But, maybe that’s about all they can do?

As we witness the alarming rise in Christian Nationalism, propagated by what is best described as “the far right,” Christian Americans need to just leery, but vigilant. If we look at this movement, at first glance, a Christian American might think that there’s nothing wrong with it — after all, if you’re a Christian, don’t you want Christian values to flourish and being American, don’t you want our country to come first? Well sure, if that’s what this movement was all about…but it most definitely is not.

We all know that there are true Christians and then there are false ones — by false, we mean people who proclaim themselves Christian, but who in reality, act, speak, think and live, in complete opposition to the teachings of Christ.

“It doesn’t matter how many Sundays you sit in Church. God sees what you do and how you treat people. That’s what really matters.”

“This people honors me with their lips, but their heart is far from me…” – Matthew 15:8

False Christians talk the talk, but that’s all they do. When it comes to actually living as Christ instructed us to, they have fallen prey to earthly traps. They have weaved politics into faith and by doing so, they have created a corrupted and false version of the Christian faith. They are filled with fear and paranoia, which the Bible clearly explains is not how true Christians should think or act. False Christians quite literally speak like the Lamb, but act like the Lion. Some might say that they’re true Christians misbehaving as false ones, but that’s still inexcusable, because the teachings of Christ are available for all to learn and follow.

True Christians, while not by any means perfect, try very hard to have faith and to follow what Christ taught. A True Christian puts love, kindness, generosity, forgiveness, tolerance and faith first…because that is exactly what we are commanded to do. A true Christian celebrates faith, because the word gospel means “good news.”

“But love your enemies, and do good, and lend, expecting nothing in return, and your reward will be great, and you will be sons of the Most High, for he is kind to the ungrateful and the evil.” – Luke 6:35

“Be kind and compassionate to one another, forgiving each other, just as in Christ God forgave you.” – Ephesians 4:32

A true Christian does not see skin color, gender, sexual orientation or nationality first, they see the world as one, because God created this world and all life — we are all God’s children and as such, we are commanded to love one another as we do ourselves. God does not want us to judge, condemn and attack each other, but rather, wants us to be kind to one another, being compassionate and forgiving.

“Do not judge, or you too will be judged. For in the same way you judge others, you will be judged, and with the measure you use, it will be measured to you. Why do you look at the speck of sawdust in your brother’s eye and pay no attention to the plank in your own eye? How can you say to your brother, ‘Let me take the speck out of your eye,’ when all the time there is a plank in your own eye? You hypocrite, first take the plank out of your own eye, and then you will see clearly to remove the speck from your brother’s eye.” – Matthew 7:1-5

Politics and faith do not mix. If one is truly faithful and has true belief in God the Father and Jesus our Savior, they wouldn’t let the raging sea of politics corrupt them. The far Christian right is deceiving people by using fear and manufactured crisis. They’re taking the Christian faith and twisting it…not to serve God, but to serve themselves and their own agenda.

“And from among your own selves will arise men speaking twisted things, to draw away the disciples after them.” – Acts 20:30

“So put away all malice and all deceit and hypocrisy and envy and all slander. Like newborn infants, long for the pure spiritual milk, that by it you may grow up into salvation— if indeed you have tasted that the Lord is good. As you come to him, a living stone rejected by men but in the sight of God chosen and precious, you yourselves like living stones are being built up as a spiritual house, to be a holy priesthood, to offer spiritual sacrifices acceptable to God through Jesus Christ.” – 1 Peter 2:1-25

“Beware of false prophets, who come to you in sheep’s clothing but inwardly are ravenous wolves. You will recognize them by their fruits. Are grapes gathered from thornbushes, or figs from thistles? So, every healthy tree bears good fruit, but the diseased tree bears bad fruit. A healthy tree cannot bear bad fruit, nor can a diseased tree bear good fruit. Every tree that does not bear good fruit is cut down and thrown into the fire.” – Matthew 7:15-20

“I don’t want to see religious bigotry in any form. It would disturb me if there was a wedding between the religious fundamentalists and the political right. The hard right has no interest in religion except to manipulate it.” ― Billy Graham

Their message isn’t one of light and hope, its one of fear, dread and darkness. The very values they claim to believe in, are the very ones they themselves are most guilty of violating. They try to convince people that they can fix all the problems through this “Christian Nationalism,” but what they’re not telling people, is that they are false Christians who actually don’t truly believe at all. The “movement” is trying to convince us that by fulfilling the law, one can get into Heaven — as we know, that is completely untrue. It hasn’t gone unnoticed that these false prophets almost always quote from the Old Testament and never the New and they are quick to judge harshly and condemn others, but never themselves.

“For sin will have no dominion over you, since you are not under law but under grace.”  – Romans 6:14

“For by grace you have been saved through faith. And this is not your own doing; it is the gift of God, not a result of works, so that no one may boast.”  – Ephesians 2:8-9

Political Ideologues Corrupt our Nation and the Christian Faith

Patriotism is not a bad thing. Being passionate about the Christian faith is not a bad thing. In fact, both are good things. Nationalism however, is not patriotism. Nationalism is more insidious and one only need look at what the Nazis did in Germany to get an idea of the dangers. We can be Christian and we can also be American. But the far Christian right is advocating that being American means being Christian and that being Christian, means holding staunchly to very restrictive views of what it means to be American. For them, God favors the United States and they believe we are a chosen people — they can’t however, explain the fact that we have always been a racially and culturally diverse country, made up of all races and religions and that freedom of and from religion, has been in our Constitution since the nations’ founding.

“Christian nationalism gives moral cover for actions, even unseemly ones, taken in pursuit of national or political goals.” – Dr. David W. Scott, Director of Mission Theology, General Board of Global Ministries of The United Methodist Church

“Christian nationalism adheres to the belief that America is God’s chosen nation and must be defended as such.” – Dr. Kristin Kobes Du Mez,

The far right has decided that using religion is advantageous to their nefarious objective. In doing so, they have run head first over the cliff and into the abyss. They willfully twist the word of God, they judge, condemn and outright lie — in every sense of the word, they are acting like anti-Christ’s, because they knowingly preach a false doctrine that is in direct opposition to Christ. Any Christian following them, does so at their very real peril, because God will not be mocked and cannot be deceived.

As for their patriotism, that is also counterfeit. Part of their deception is also trying to convince people that they stand for traditional American values, but they most assuredly aren’t following our core American values. America is a nation built on the ideal of freedom, fairness and equality for all. We have failed sometimes, as all nations do, but what makes America unique is that we try to learn from our mistakes and do better. Christian Nationalism is a complete betrayal of the core principles on which our nation was founded.

What True Christians Can Do

The New Testament is a new covenant with man and it teaches us how we should think, act, speak and live. Christ our Savior didn’t come to condemn the world, but to save it. He gave us all that we need to know to be good, faithful Christians. “And he took bread, and when he had given thanks, he broke it and gave it to them, saying, ‘This is my body, which is given for you. Do this in remembrance of me.’ And likewise the cup after they had eaten, saying, ‘This cup that is poured out for you is the new covenant in my blood.’ – Luke 22:19-20

Christians are called upon to have true faith and not to fear. In Romans 12:2, we are taught: “Do not be conformed to this world, but be transformed by the renewal of your mind, that by testing you may discern what is the will of God, what is good and acceptable and perfect.” And in Ephesians 4:31-21, we are told to “Let all bitterness and wrath and anger and clamor and slander be put away from you, along with all malice. Be kind to one another, tenderhearted, forgiving one another, as God in Christ forgave you.” True Christians should reject false prophets and listen to their heart. If anyone tries to “teach” us something that runs in opposition to the tenets of Christianity, it should be ignored — any person who “preaches” something opposite to those teachings or whose words are centered around anger, fear or aggression, is not preaching the Word of God.

“For God so loved the world, that he gave his only Son, that whoever believes in him should not perish but have eternal life.” – John 3:16