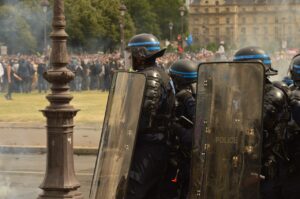 Conflict is something that exists not just in human nature, but in nature itself. Animals have conflict with each other, but it’s humans who have taken conflict to a whole new level of darkness and depravity.

When we think of conflict, we invariably imagine a physical battle. However, conflict doesn’t always have to have a physical component at all. When did conflict begin? It’s really impossible to know when or how it began, but perhaps it all started when Cain slew Abel? We don’t know for sure, but one thing is pretty obvious and that is the fact that humans have taken conflict to a whole new level of depravation.

In a May article in the Wall Street Journal, Psychologist Susan Pinker writes: “If you’ve ever watched someone start an argument just to win it, then you’ve witnessed a maneuver the person has likely been honing since third grade. Stirring up conflict is how some young children manage to achieve top-dog status, according to a study recently published in the journal Personality and Individual Differences.”

Pinker notes that as early as third grade, there are those students who strategically use aggression to gain popularity — I imagine, its also a tactic to gain power. After all, the popular kids, even in third grade, do hold a certain amount of power and are seen as “leaders,” probably even by some of their Teachers.

Conflict is generally defined as a confrontation arising out of a real or perceived difference in attitudes, thought process, behaviors and interests. We all know conflict isn’t anything new and that there are many forms and levels of conflict. For example, conflict can arise between individuals, businesses, political parties and countries. If not controlled or curtailed at just the right time or in the right manner, conflict can escalate and lead to a protracted state of hostility, as in the case of war between nations.

Simply put, conflict can create strife, unrest, chaos and even war. Conflict comes in many forms and degrees, but we often see conflict in the following manifestations:

Between individuals: Whether in the workplace, between neighbors and even whole towns, this is most often low level conflict.

Between Corporations: Some might call this “healthy competition” and at some point that was a correct way of looking at it. Today however, companies go to war with one another and often employ a scorched earth policy to achieve dominance.

Between political parties / political ideologies: Political conflict is broad sweeping in its threat to peace. Different political parties engage in open warfare with their opposition — we see this played out in what seems like an unending loop of escalating hostility, as each political party attacks the other. It is this type of conflict, which if left unchecked, can lead to civil war, revolution and even global conflict.

Between religions: Conflict between and even within religions, dates back millennia and this type of conflict is a major catalyst for escalating tensions on a local, national and global level.

Between nations: Directly tied to economics, politics and even greed, nation vs. nation conflict generally results in global unrest, violence and chaos.

These are not the only types of conflict, but they suffice to lay the base for the dangerous and some might say nefarious, mutation of conflict itself.

Competition vs. Conflict
There is nothing wrong with healthy competition between sports teams, corporations or people — after all, we would all stagnate if no one tried to do better than their “competitor.” And, we know that conflict is nothing new. So we’ve pretty much always had both, but over time, healthy competition led to intensifying conflict. Kids as young as the third grade are consciously using conflict or aggression to attain power and popularity, so we know that somewhere along the way, we took “healthy competition” too far. It seems mankind has abandoned the notion of competition in favor of using the more savage go-to strategy of open conflict.

Take for example politics. In the good old days of embracing healthy competition, two politicians running for the same office, but from different parties, would campaign on their merits and achievements — they would point out their strengths, promote their plans for making things better and encourage people to vote for them because they were the best candidate. Of course, there would be some level of “attack” on the opponent, but it would be measured and always backed up with the one candidate re-affirming why they were the better candidate. Today? Today, we have vicious, dirty, hostile and almost violent campaigning — many political candidates don’t ever tell us why they’re the better candidate and instead, start off with a ferocious attack not just on their opponent…but on every man, women or child that would dare to support that opponent. So we’ve gone from competition, to unabashed conflict. It might be okay if this type of open, hostile conflict stayed within the confines of politician vs. politician, but it hasn’t — it’s spilled out like a deluge of anger and even violence, into the streets of America.

Along the way, someone, at some point, realized that there was money to be made and power to be gained from conflict, especially engineered conflict — and it is this fact that we need to confront. For now, we can call them “conflict profiteers” and look at some ways people have a vested interest in causing and exasperating conflict:

Conflict when left unchecked is a very toxic and dangerous state to be in. But this is precisely what has happened, because someone…at some point, realized that there is a tremendous amount of money to be made and power to be be grabbed, all from creating and perpetuating conflict.

What Can Be Done?

What can we do about this? More than we may think. I think the first thing to do is to reign in our political leaders and reclaim the power of the people. We mustn’t allow ourselves to be stirred into a frenzy of fear and paranoia by their manufactured crises and fabricated fear and hysteria. Above all, we need to take a deep breath and think before we react — sometimes, taking a break from the news, politics and other stresses in life, gives us the opportunity to recharge. Another cathartic exercise is to contact your elected political representatives and let them know that you demand a return to civility in government. Also, focusing on the positive and our own mental health, is usually the best way to prevent being drawn into the chaos created by “conflict profiteers.”